NYTimes.com reports on how water conservation initiatives are underway at stadia and arenas across North America

You are here: Home / Latest news / NYTimes.com reports on how water conservation initiatives are underway at stadia and arenas across North America
Tags: green iniatives

In a recent online article by New York Times.com correspondent Ken Belson, the innovative water conservation initiatives being utlised at stadia and arenas across North America were highlighted. As the piece provided significant insights into the best-practices and solutions that other sports venues facing similar challenges could employ, we have reproduced the article below.

Few things are more essential to sports venues than water. Without it, green fields would turn brown, rinks would have no ice and pools would be empty. Showers, toilets and kitchens wouldn’t function. The games simply could not go on.

So with drought conditions gripping parts of the country, teams and stadium operators have increased their water conservation efforts to help their bottom lines and public images.

In many cases, teams have installed off-the-shelf products like low-flush toilets and sensor-activated faucets that can save millions of gallons of water during a season. They are also using technological solutions, like underground sensors that transmit data about fields’ moisture levels via wireless networks to help venue managers decide when to turn sprinklers on or off.

Levi’s Stadium, the 49ers’ new home in Santa Clara, Calif., has received a coveted green certification in part because of efforts to use less water in a drought-stricken area. Other arenas are also cutting back on water use. (Top image: Nathan Weyland for The New York Times.)

As communities deal with water shortages, stadium and arena operators from Arizona to Washington State are taking myriad conservation measures. But the variety of uses for water at sports venues means there is no single solution that can reduce consumption. 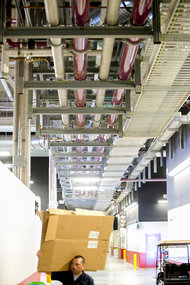 At Levi’s Stadium, recycled water flows through purple pipes to be used for toilet flushing and irrigation. Image: Nathan Weyland for The New York Times.

Allen Hershkowitz, the director of the Sports Project at the Natural Resources Defense Council, said that range was not a bad thing because venue operators prefer to make smaller investments in their buildings rather than sweeping renovations:

There is no one single bullet at any sports venue to address water conservation by itself. It is a series of smart but small adjustments. This allows people who run these venues to evaluate the cost and return on investment.

Unlike electricity, water use has not been consistently tracked in arenas and stadiums, partly because it has been heavily subsidized for decades. As a result, building operators have had less incentive to invest in water conservation.

But the cost of water-saving technology has fallen in recent years, and sports venue operators have embraced wider social and environmental mandates. In more drought-prone regions, utilities have also issued rebates to building operators that have conserved water.

Eighty-five percent of the water used at Levi’s Stadium is recycled. Image: Nathan Weyland for The New York Times.

Andy Gorchov, the general manager of the Stadium Management Company, which runs Sports Authority Field at Mile High in Denver, where the Broncos play, said his company had received a rebate from Denver Water worth US$60,000, or 40% of what it paid for a new irrigation control system. His company received US$18,000 more in rebates for reducing water use.

For a facility the size of the stadium, there are a lot of things you have to prioritize in terms of capital upgrades.

Denver Water also paid for toilets that use about 20% less water per flush for the stadium’s 144 luxury boxes. With the utility’s financial help, Mr. Gorchov installed moisture sensors under the stadium’s turf and more water meters around the 89-acre site to better track water use.

It would irritate me when it would rain and the sprinklers would be going, too.

The stadium also uses solar panels on several walkways and on the roof of a suite tower. Image: Nathan Weyland for The New York Times.

Stadiums in California, where much of the state is experiencing severe drought, have even bigger challenges. At the San Francisco 49ers’ new home in Santa Clara, which opened this summer, 85% of the water used is recycled water.

The Anschutz Entertainment Group (AEG), which runs dozens of venues around the world, including the Staples Center in Los Angeles, said it had already exceeded its goal of reducing water consumption per attendee by 20% by 2020.

The Staples Center, one of the busiest arenas in the world, conducted an energy audit and found that each of its 178 urinals used 44,000 gallons a year. By replacing them with waterless urinals, AEG said, it has saved more than seven million gallons a year and US$28,200 annually.

The company has taken similar steps at the Rabobank Arena in Bakersfield, Calif., where 516 toilets, urinals, faucets and shower heads were replaced, saving about one million gallons of water a year. At the StubHub Center in Carson, Calif., recycled water is used to irrigate playing fields, while at Citizens Business Bank Arena in Ontario, Calif., reclaimed water is supplied to the cooling towers, saving about 115,000 gallons of potable water each week.

After games at MetLife Stadium in New Jersey, where the Jets and Giants play, cleanup crews pick up all the compostable or recyclable trash in the stands, which is about 90% of the garbage left behind. This leaves just 10% to be pressure-washed away.

Mustard, ketchup, beer and soda – you need water to clean that stuff.

He also said sensor faucets were added when it was discovered that staff members were unintentionally leaving water running in sinks.

Leagues are getting involved, too. The National Hockey League (NHL), whose teams collectively use more than 300 million gallons of water each season, is encouraging clubs to install more efficient dehumidifiers to reduce ice melting, and to use reverse-osmosis filtration systems to remove minerals from water and create harder ice for the rinks; that reduces maintenance and refrigeration. Making ice for each rink requires about 12,500 gallons.

The NHL also participates in the Gallons for Goals program with the Bonneville Environmental Foundation. For every goal scored during the regular season, the league buys water restoration certificates that help pay for water conservation efforts or water efficiency technology, like drip irrigation equipment, said Val Fishman, the foundation’s vice president for corporate partnerships.

Water is in the DNA of ice hockey. NHL Green’s mandate confronts this issue head on to ensure all stakeholders – from ice technicians to fans – know about fresh water conservation, both from a financial impact and from a social awareness perspective.

This article, written by Ken Belson, can be found on the New York Times’ website at: