WHAT DID THE ROMANS EVER DO FOR US? Which current stadiums and public venues will still be standing 2,000 years from now?

If you think that is a silly question, and the answer is obviously none, please note several large amphitheatres built during the Roman Empire and sprinkled throughout Europe still stand with some of them hosting events on a regular basis.

Most of us have heard of the Roman Colosseum, which is one of the world’s biggest tourist attractions with six million annual visitors, but as a stadium manager, I was stunned and a little embarrassed that I never knew about the Colosseum in Pula, Croatia (constructed by the Romans between 27 BC and 68 AD) until I had an opportunity to visit it this summer.

For a modern day stadium manager, it was a humbling experience.  Our predecessors knew a lot more than we give them credit for, and we could learn from them.

My experience in Pula got me thinking, what lessons can we take from these early structures, and what ancient wisdom can we apply to our own venues so as to improve the odds that they stand the test of time?

Doing a little research, I settled on three noteworthy areas they excelled in that are still relevant today: engineering, craftsmanship, and logistics. 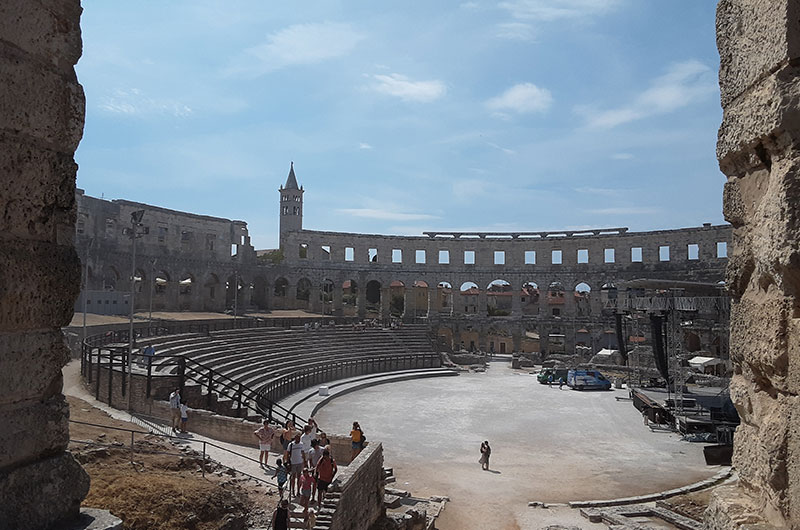 If you know anything about world history, you probably already knew that the ancient Romans were fantastic engineers.

For example, to build the Roman Colosseum, it is believed they used Pythagorean triangles to help determine the height and length of walls, an architectural principal that is still used.

For the Colosseum in Rome, they dug an elaborate drainage system 30ft under the ground, and they had to move 30,000 tons of earth before they could set the foundation.

Some scholars believe they had water fountains and lavatories inside these structures as well. We may have our retractable dome stadiums, but they had retractable awnings that it is believed shielded spectators from sun and rain and were designed in a way that circulated a cool breeze.

The idea that they were able to design venues with up to 55,000 seats two Millennia ago is amazing enough, but the subterrain area of the Roman Colosseum is audacious even by today’s standards.

Constructed between 81-96 AD, it was a two level subterrain gallery below the arena floor that housed animals that could be hoisted up through 80 shafts to then be set free though trap doors that led to the arena’s floor.

A truly amazing feat of engineering still puzzles experts today as they consider how they pulled it off.

There is documentation that suggest during the Roman Colosseum’s opening ceremony, they were able to flood the arena floor and recreate a famous naval battle that took place in the fifth century BC. Let’s see a modern venue pull that off! 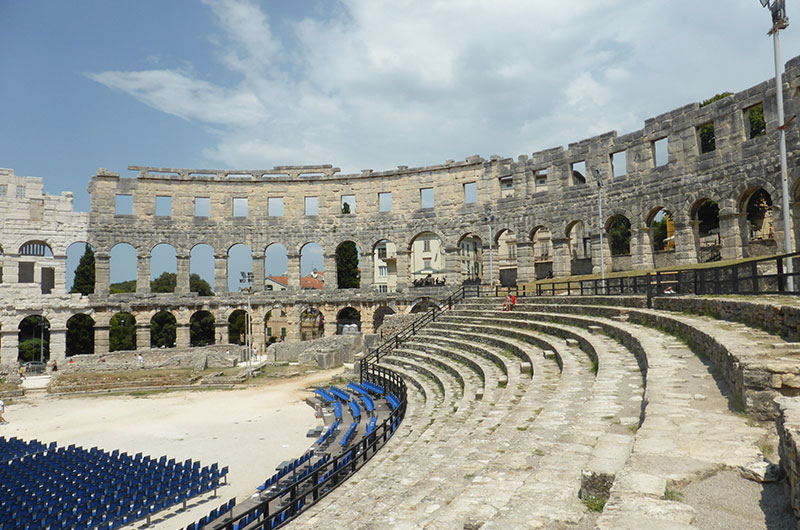 From the historic churches of Europe to the early government buildings of the New World, we are all aware that in the past, great public venues also housed and incorporated priceless artwork into their structure.  Think the Sistine Chapel.

Somewhere along the line this tradition faded out, as builders settled more for practicality rather than art.  The ancient Romans had their cake and ate it, too.

Although much of the grand artwork, like large statues of Apollo, Ascelepius, Venus, Juno, and the over 30-yard high Colossus of Nero is lost to time, we do see hints that some of their artistic features had a practical purpose as well.

Outside the Roman Colosseum there are bollards and a travertine walkway that are not only decorative but functional as well. The bollards, just like in today’s venues, kept vehicular traffic from getting too close to the building, and the travertine allowed vendors to sell their wares without getting muddy on rainy days.

Inside the Roman Colosseum were decorative polished marble walls that separated the arena floor from the stands.

The marble walls were more than just artistic. Marble being marble, they were slick and prevented the animals who let loose from climbing up the walls and harming the audience.

If you run a public building, you probably are quite well versed in handling logistical challenges.  In many ways we are just following the footpath the Romans laid out for us.

The Roman Colosseum, for example, had 76 numbered entrances, which allowed guests to enter the building in a way which helped ensure they got to their seats expediently.

They had wide concourses (galleries) which permitted guests to move about quickly and provided an area to stretch during intermission.

They also had passageways that led to stairwells to take attendees conveniently to different levels.

Just like today, guests had to have a ticket to enter, and they even had premium seating, where the lower you were in the seating bowl the higher your status in society. They even had VIP entrances on reserve for special guests, like the Emperor.  From here he could enter and exit quickly, bypassing citizens who weren’t too keen on his administration. WHAT DID THE ROMANS EVER DO FOR US?